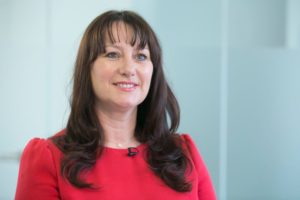 Julie, who served as the club’s first female chairman between 2011-13, said: “Everyone in the club was devastated by David’s untimely passing. He has left an indelible impression and made a great contribution to our club’s affairs, and it is an honour – and a great challenge! – to be asked to follow in his significant footsteps.”

Julie qualified as a solicitor in 1990 and has established her reputation in advising PLCs, SMEs, investors and entrepreneurs on corporate, commercial and strategic issues.  She is also Excello Law’s business development ambassador for the North West and won the Downtown in Business Legal Entrepreneur of the Year Award in 2016.

A native of Liverpool, she is married with two sons – noting that she has another career as ‘their personal assistant and taxi driver’ – and is a lifelong supporter of the Reds at Anfield.

Julie added: “For over 30 years Chester Business Club has played a leading role in the area’s business and community life. It has also made a huge contribution to charity, having donated over £700,000 to local charitable causes. I shall be doing my level best to assist in carrying the club forward, not least in helping create a vibrant and engaging forum for businesses to connect.”

In welcoming Julie’s appointment, club chairman Paddy Gill said: “We are delighted Julie has agreed to become our president.  She is a highly experienced and much-respected professional with the gift of motivating people, coupled with being such a likeable and engaging personality.”

George Bisnought, managing director of Excello Law, commented: “We’re delighted for Julie.  The appointment is a real honour and recognises her profile in Chester and further afield, and her leadership skills in bringing businesses together to support and invest in their local community.”