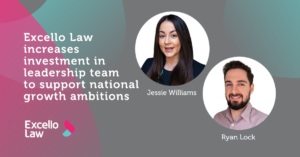 National disruptor law firm Excello Law has made two additional appointments to its leadership team with the arrival of new departmental head roles focusing on risk and compliance, and technology and innovation.

Qualified solicitor Jessie Williams has been appointed as head of risk and compliance, having joined Excello from law and business advisory firm Ince (formerly Gordon Dadds) where she was senior manager, risk and governance and was employed during a significant growth and acquisition period for the business. Jessie also has experience in the banking sector and extensive knowledge of anti-money laundering regulations and FCA rules. She will act as a key point of contact for lawyers and their teams.

Ryan Lock has been appointed as senior technology and innovation officer, having worked for the past five years at Digital Space, a converged managed services provider, latterly within the systems and development team. Excello has been recognised as an innovator within the legal services profession since its inception and Ryan will be responsible for seeking continuing innovation within IT to support enhanced ways of working for Excello’s consultant lawyers and the continued growth of the firm.  He will also act as a central point of expertise on IT projects and systems implementations.

In addition, Excello has appointed three new members of its central administrative and secretarial support team – Excello 360 – at its offices in Liverpool, Chester and Birmingham, providing dedicated on-site support for lawyers.

Joanne Losty, director at Excello, said: “We have significant plans for growth and expansion over the next five years and the appointments of Ryan and Jessie to our leadership team, and the enhancement of resource within our 360 team, confirms our commitment to investing in the depth and breadth of our central business resources to ensure we have the highest levels of support for our consultant lawyer teams and client service delivery.”