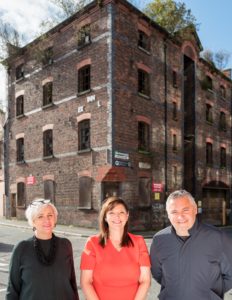 Liverpool Law Firm of the Year, Excello Law, acted for Baltic Creative CIC in the recently-completed purchase of an historic 19th century docklands storehouse in the Baltic Triangle, Liverpool. The four storey, red brick warehouse, located at 61-65 Norfolk Street, and adjoining two storey building on Simpson Street have been acquired from Liverpool City Council on a 125 year long lease.

Heather Summers of Excello Law has been lead legal adviser on a number of third sector capital projects and was the lynchpin for six other legal teams involved in the deal, as well as the reorganisation of existing security:  “This was a very complex transaction, that has taken over 18 months to complete and involved six legal teams working on the acquisition and finance. The purchase, and subsequent restoration, will deliver a world-leading space for creative and digital businesses.”

Currently in a poor state of disrepair, Baltic Creative will undertake a 10-month restoration programme to sensitively refurbish the buildings and create a further 17,000 sq.ft of flexible modern workspace to develop the Baltic Triangle’s first digital technology hub. Once established, the scheme will support around 30 companies and 150 full-time jobs.

The scheme will feature a variety of different sized studios alongside collaborative breakout areas, meeting rooms and co-working space. The ground floor will also include a public café with events space and outdoor green area.

Baltic Creative CIC has secured £2.6m investment from The Charity Bank and European Regional Development Fund in order to deliver the scheme, which will start on site in November 2017 and is expected to be ready to let by September 2018.