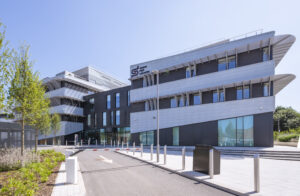 Excello real estate partner Richard Osborn has been involved in the Space Park Leicester development for over 5 years, originally advising University of Leicester on the acquisition of land from Leicester City Council for the development through to the more recent lettings to Industry Partners. The pioneering Space Park development was officially opened by British astronaut Tim Peake in March this year.

Space Park Leicester is a £100 million+ space research, innovation and teaching cluster providing state of the art facilities for R&D, manufacturing and education. It was developed by the University with local, national and international partners and will house capabilities and companies covering an end-to-end resource and expertise, from satellite design and engineering, through to downstream data and its applications, creating unmatched opportunities for collaboration.

Richard, who is also a former graduate of University of Leicester commented: “It was very exciting to see the official launch of Space Park Leicester and to have been involved in this amazing development from the early days. As a real estate project, it has been multi-faceted and often complex, but its worth to Leicester – expected to boost the regional economy by £750 million and create 2,500 jobs – as well as to the UK’s wider scientific ambitions is enormous. I am very proud to have been involved in supporting my client through the development.”

Dharminder Shoker, Head of Real Estate Management at University of Leicester said: “The project builds on University of Leicester’s 61-year history of space research and its role in establishing the neighbouring National Space Centre, and places Leicester at the forefront of space technology in the UK.  We have been very grateful for the support of Richard and the Excello Law team for their legal advice on the property and development aspects of this project.”

Space Park Leicester is located at Pioneer Park within the Loughborough and Leicester Science and Innovation Enterprise Zone. The Leicester and Leicestershire Enterprise Partnership Limited (LLEP) allocated £12.9 m of Local Growth Fund to develop the infrastructure and deliver the first phase – a science and innovation facility with earth observation, coding, training and general facilities that represents the core of the Space Park.