The UK press is full of concerns about the UK’s allegedly growing economic dependence on China, particularly in the light of Brexit. 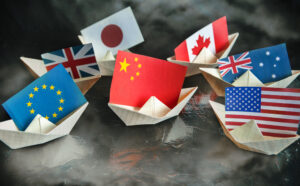 An article in The Sunday Times of 11th July 2021 focuses on the recent takeover of a UK semiconductor design and manufacturing business, Newport Wafer Fab ( NWF) by Netherlands Company, Nexperia, a company controlled by the China state-backed entity, Wingtech. There are demands from some quarters that this take-over be challenged on national security grounds.

Whilst some in the UK fear Chinese influence, others, particularly so-called “globalists in the UK Conservative party”, believe (according to The Sunday Times article) that Chinese investment in the UK economy is crucial following Brexit and that the UK must be careful not to be too confrontational with China over Far East–centric political issues. Hence, the title to The Sunday Times article is “China and the chip factory – Johnson’s high-tech dilemma”.

In world terms, Brexit may be a small issue –  the UK needs to decide how to manage it in that context.

On 21st July 2021, the UK Government published a Command Paper setting out its proposals to amend the Protocol.

The Command Paper was phrased in polite terms and the press release issued by EU Vice President Maros Sefcovic was equally polite, even though on the face of it the parties are poles apart. The essential difference appears to be that, whilst the EU (according to Mr Sefcovic)  is “ready to continue to seek creative solutions, within the framework of the Protocol, in the interest of all communities in Northern Ireland” , the EU will not agree to a renegotiation of the Protocol, which contrasts with the UK’s wish to change material provisions of the Protocol.

It may be that these differences of approach are more apparent than real and that agreed steps on at least some aspects will be arrived at (as suggested by Mr Sefcovic in his press release) through joint action in the joint bodies established by the UK-EU Withdrawal Agreement 2019, of which the Protocol forms part.

On 16th July 2021, the European Commission adopted a proposal for a Council Decision on EU accession to the Hague Convention on the Recognition and Enforcement of Foreign Judgments in Civil or Commercial Matters 2019 (the Hague Judgments Convention 2019).

Accession by the EU to this Convention would facilitate the recognition and enforcement of civil or commercial judgments between the EU and third countries and, if the UK were to adhere to the Convention, the UK would be such a third country.

The UK and EU may at least seem to be drawing a little closer towards resolving these recognition and enforcement issues, if only through membership of non-EU specific international conventions

As far the as EU membership of the 2019 Convention is concerned, the Council Decision would be adopted under a non-legislative consent procedure requiring the European Parliament to approve the act before it can be adopted formally.