Never assume ‘it goes without saying’ in contract wording 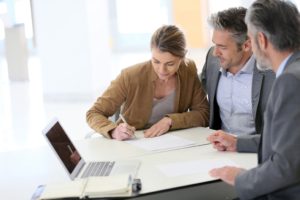 Two parties negotiate and agree the terms of a contract, which they put in writing and sign.  Some time later one or other party realises that the contract does not actually expressly include a term which it considers is vital to the contract.  Can it then ask the court to imply the relevant term into the contract?

As so often with legal questions, the answer is “Yes, but…..”  The courts will, if necessary, imply terms into a contract, but the term to be implied must satisfy one of two tests.  The first, formulated as long ago as 1889, is whether the term is necessary “to give business efficacy to the contract”.  In other words, must you imply that term for the contract to be commercially or practically coherent?

The second test is known as the “officious bystander test” from the explanation of the logic explained by the original judge in 1939.  He suggested that one had to imagine an officious bystander listening to the parties negotiating the contract.  In the judge’s words, if the bystander had suggested that the relevant term should be included in the contract, “he would have been testily suppressed with a common ‘oh, of course’.”  The test is also often described as meaning that the missing term must “go without saying”.

If one or other of the two tests is satisfied, then courts may be willing to imply terms into a contract, but the courts are traditionally reluctant to alter what the parties have agreed, and there are strict limits to what terms the court will imply.  In particular, the courts have always followed the rule that the implied term must be fair and reasonable in the context of the contract as a whole.  In the last two years, the Supreme Court has added to this that, while the term must be fair and reasonable, but it does not follow that it should be implied just because it is fair and reasonable.  People and companies make bad bargains: they agree to contractual terms which are unfair or unreasonable.  It is not the court’s role to relieve them of their mistake and the court will not imply a term simply because it would make for a better deal for one of the parties.

Late in 2017, the Court of Appeal looked at a similar issue.  In breach of a confidentiality provision in an intellectual property licence, one party disclosed the terms of the licence to a would-be buyer of its business (who also happened to be a competitor of the company which granted the licence.)  When challenged, they argued that it “went without saying” that they would need to disclose the licence arrangement to a buyer and that the term ought therefore to be implied to give business efficacy to the licence agreement.  The Court of Appeal disagreed.  The defendant had agreed to strict and binding confidentiality obligations.  If those strict rules were what the other party sought, it did not “go without saying” that it would be prepared to waive them and the “business efficacy” test required the term to be necessary to give business efficacy to the contract itself, not to some wider commercial purpose of one of the parties.

It goes without saying(!) that the lesson is not to “testily suppress” the officious bystander, but to make sure that all of your key commercial requirements are reflected in the express wording of the contract, even if that means spelling out something you think is blatantly obvious anyway.