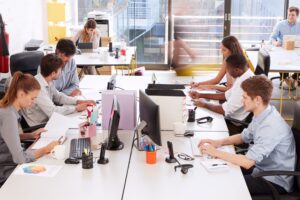 Theresa May has spent her final few weeks in office trying to salvage a meaningful prime ministerial legacy from the long shadow of her failed Brexit strategy. Part of this effort is her plan to introduce 12 weeks’ paternity leave for new fathers, as part of her drive to reduce the UK’s gender pay gap. It is proposed that employers would pay fathers for the first four weeks of paternity leave at 90 percent of their normal salary, while the remaining eight weeks would be unpaid. This is intended to reduce the gender pay gap by increasing the sharing of parental responsibilities, and freeing mothers up to return to work earlier.

One of the “burning injustices” which Mrs May listed in her maiden speech as prime minister in 2016 was that, “If you’re a woman, you will earn less than a man.” In 2017, Mrs May announced a major drive to reduce the gender pay gap. The 2018 ONS figures show that the gender pay gap has indeed reduced to 8.6 percent for full-time employees – down 0.5 percent from 2017. However, the gap among all employees is 17.9 percent

A policy of reducing the gender pay gap by giving fathers a legal entitlement to take a significant break from work to care for their babies is commendable. This would also benefit fathers, giving them an opportunity to spend more time bonding with their new babies.

At present, fathers receive just paid two weeks paternity leave at the lower of 90 percent of their salary, or the SPP rate. Mrs May’s policy would double the period of paid paternity leave and significantly increase paternity pay for most employees. However, in response to concerns that the policy would cost businesses too much, it has been reported that a cap on the proposed paternity pay is now being considered for higher earners.

The mooted cap for higher earners seems unnecessary and unjust. Capping paternity pay those earning over £100,000 for example, would greatly assist city firms and investment banks – the very companies which can afford to pay for paternity leave. However, it will not help small businesses, where the greatest burden of the new policy will arguably fall. Furthermore, a cap may open to challenge on the grounds of being discriminatory on the grounds of sex. If maternity pay is not capped on the grounds of earnings, then why is paternity pay?

Past experience also suggests that the take up of unpaid element of the new paternity leave rights may be very limited. For example, the current scheme of shared parental leave has a very poor uptake, with estimates as low as 2 percent. Statutory shared parental leave is already available for fathers, intended parents, adoptive parents or the mother’s partner.

In addition, parents are entitled to 18 weeks’ ordinary parental leave for each of their children before the child turns 18. The annual limit on unpaid parental leave per parent is 4 weeks for each child, but employers can agree to allow more. A disadvantage is that employers can postpone parental leave by up to six months where they can show it would cause significant disruption to the business.

Therefore, as it stands, fathers get 2 weeks paid paternity leave, and are also entitled to 50 weeks shared parental leave, together with 4 weeks ordinary parental leave. Yet relatively few fathers avail of these existing rights to unpaid parental leave.

It therefore seems unlikely that the unpaid 8 weeks of the new paternity leave scheme would be taken up by most fathers, particularly since most families struggle financially during the maternity period, when the mother is already typically receiving reduced pay – often as little as £148.68 per week. Most families would struggle to pay the bills with one earner on maternity leave and the other unpaid. This may also be the case even for higher earners, since a higher the income, sometimes the higher outgoings.

Certainly, the uptake of unpaid shared parental leave has been very low. The low uptake may also be partly due to the notoriously complex legislation and red tape associated with the parental leave scheme. Hopefully, the new paternity scheme will be free of the complexities that gave employers such a headache over shared parental leave. Indeed, making the scheme simple to understand and to administer is vital to increase the uptake of expanded paternity leave, and so to help further reduce the UK’s gender pay gap.