On 28th June 2021, the online newsletter, City AM, reported that the UK would be starting trade talks with Singapore for a Digital Economy Agreement (DEA) with the aim of removing barriers to digital trade between the UK and Singapore. According to the City AM report, “the aim of the DEA is to make it easier for companies to trade through the use of digital technology”. The report said that the negotiations would “focus on opening digital markets for exporters; ensuring cross-border data sharing; promoting digital trading systems like e-signatures and e-contracts that will streamline the export process; protecting consumer rights and IPs; and cybersecurity”. 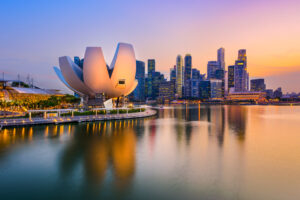 Following Brexit, these trading agreement initiatives on the part of the UK with non-EU countries clearly have more than symbolic importance for the UK economy, with the City AM report quoting the UK International Trade Secretary, Liz Truss MP, as saying of the negotiations with Singapore that “the UK will be the first European country to ever negotiate a Digital Economy Agreement, which shows what we can do as a sovereign trading nation”.

On 30th June 2021, the UK Government issued a press release to accompany the introduction into the UK Parliament for approval of the Subsidy Control Bill. The Bill is one of the post-Brexit measures announced in May 2021 for the setting up of new regulatory systems following the UK’s withdrawal from the EU.

According to the press release, the new UK system of subsidy control will have as an objective the strengthening of the Union of the United Kingdom by prohibiting “the awarding of subsidies that will result in the relocation of jobs and economic activity from one part of the UK to another –  known as displacement”.  This is consistent with the provisions of the United Kingdom Internal Market Act 2020, which, according to the press release, “clarifies that the UK Parliament alone should legislate for the regulation of subsidies [and] also helps to ensure that there is no confusion or ambiguity in law about the interpretation of the State aid elements in the Northern Ireland Protocol.”

The press release criticises the EU’s “bureaucratic” state aid regime which it replaces and states that “the new UK system will start from the basis that subsidies are permitted if they follow UK-wide principles – delivering good value for the British taxpayer while being awarded in a timely and effective way”.

Under the Bill, which (subject to being enacted) the UK Government intends to be brought into effect in 2022, unlimited government guarantees to businesses will be banned as well as (according to the press release) “subsidies granted to “ailing or insolvent” enterprises where there is no credible restructuring plan”. On the other hand, a limited set of subsidies will be exempted from the control principles, such as those required for safeguarding national security and subsidies granted temporarily to address emergencies such as flooding.

The press release makes it clear that a new Subsidy Advice Unit will be set up within the UK Competition and Markets Authority and that enforcement of the new Subsidy Control regime will be through the UK’s courts and tribunal system, with jurisdiction to review the award of subsidies being given to the UK’s Competition Appeal Tribunal.

The press release adds that “in order to protect UK competition and investment and to minimise distortions from specific subsidies, the new system will introduce two specific categories of subsidies – Subsidies of Interest and Subsidies of Particular Interest – for which granting authorities may undertake more extensive analysis to assess their compliance with the [subsidy control] principles”.

The new Subsidy Control Bill is a major piece of legislation with deep implications for UK trade and investment and, according to the press release, “sets out key elements of the new domestic subsidy control regime in primary legislation”.

The press release states that “further details on implementation and guidance will be set out in due course” and this information is likely to be eagerly awaited by those concerned.

Brexit and the UK Prospectus Regime

Following Brexit, the UK Government appears to have stepped up its efforts to make the UK an attractive place for corporate capital-raising and investment.

Recent evidence of this is the consultation document issued by the UK’s HM Treasury on 1st July 2021 on the UK prospectus regime for companies. The consultation, which closes on 17th September 2021, seeks views on a number of subjects, including:-

The UK Government might argue that Brexit has given new opportunities for this approach.