UK legislation on food standards has been much influenced by EU legislation. However, during the UK’s membership of the EU and the following one-year post-Brexit transition period, this has meant the UK having to accept the import of foodstuffs into the UK from the EU, the production of which in the UK would not necessarily be permitted on animal welfare grounds.

One example of this is the French delicacy, “foie gras”, literally “fat liver” which is artificially fattened goose livers produced through processes involving live geese in a manner which is banned in the UK on animal welfare grounds under the UK’s Animal Welfare Act 2006.

The Times of 8th March 2021 reports that the UK Government is now taking steps to draft new UK legislation to ban the import of “foie gras” products into the UK, as the UK is no longer bound by EU free trade rules on movement of goods following the expiry of the post-Brexit transition period on 31st December 2020. This plan apparently has the strong support of Lord Goldsmith of Richmond Park, the UK’s animal welfare minister, who has long campaigned for the banning of “foie gras” in the UK.  Whether the plan extends to Northern Ireland, which effectively remains within the EU Single Market, or is simply confined to Great Britain, is not clear from The Times article but this could be problematical under the terms of the UK-EU Withdrawal Agreement of October 2019 and the UK-EU Trade and Cooperation Agreement of December 2020.

Of course, the new trade freedoms that both the UK and the EU have with each other following Brexit and the expiry of the post-Brexit transition period can be a double-edged sword as the EU’s reported refusal to permit certain imports of British shellfish demonstrates. In relation to this problem, the same edition of The Times of 8th March 2021 reports that the UK Government is said to be planning to block imports from the EU of mineral water as a retaliatory measure. Again, whether this plan to block imports of mineral water would extend to Northern Ireland as well as Great Britain is unclear for the same reasons as before.

There is a fine line to be trodden on food safety, security and cultural issues and its impact on free trade in goods between the UK and EU.

Brexit and the Union Connectivity Review

On 10th March 2021, the UK Government published the Interim Report (March 2021) of the Union Connectivity Review (UCR), the review commissioned by the UK Government and led by Sir Peter Hendy CBE (an experienced civil engineer and, amongst other roles, Chair of the UK’s Network Rail) into the transport infrastructure needs of the UK following Brexit.

The Interim Report points out that, while the UK was a member of the EU, key sections of the UK’s transport network were part of the Trans-European Transport Network (TEN-T), that the UK’s financial contribution to TEN-T was about €447m annually and that TEN-T “was designed to support the development of the [EU] Single Market by improving connectivity, promoting social cohesion, and helping to ensure interoperability between different [EU] Member States through the alignment of technical standards”. According to the Interim Report, TEN-T is supported by regulatory targets for the completion of the core trans-European transport network by 2030 and of the comprehensive network by 2050.

Interestingly, the Interim Report confirms that the connectivity aims of the UCR “align with those of TEN-T” and that “the approach taken by the EU to the inception, assessment and implementation of the European network will be considered in further detail”. It is perhaps gratifying to note, therefore, that in the case of transport infrastructure the UK appears, to a degree, to consider itself still as part of the wider European project and not as a separate island cut off from Europe.

One of the most eye-catching references in the Interim Report was to UK Prime Minister, Boris Johnson’s, idea of a fixed link between Great Britain and Northern Ireland, either by way of a bridge or a tunnel. In order to consider the feasibility, costs and timescales for such a project, the Interim Report confirms that, as part of the UCR, a separate team has been set up under the auspices of two leading civil engineers (Professor Doug Oakervee CBE and Professor Gordon Masterton) to review this specific project (which will presumably include analysis of the relative merits of a bridge or a tunnel).

The Times of 11th March 2021 reports that Grant Shapps, the UK Government Transport Secretary, has backed plans for a tunnel, saying that it should not be seen as a “controversial” proposal. One of the likely routes for such a tunnel is the 28 miles’ stretch from Larne in Northern Ireland to Portpatrick in Scotland and, according to The Times report, such a scheme could cost between £8 billion and £24 billion  – a broad range without taking into account any cost overruns!

The Times of 11th March 2021, in its first leader editorial, is clearly sceptical of the commercial feasibility of a fixed bridge or tunnel link between Northern Ireland and Great Britain and recommends the UK Prime Minister to “beware of grand follies and instead concentrate on improving practical transport links within the United Kingdom” – and indeed the Interim Report does consider in detail these “practical” links (of which The Times in its editorial does give examples such as the AI London-Edinburgh road north of Newcastle, which in some places remains a single carriageway and could do with upgrading) – but occasionally it is necessary to have bold dreams. The fixed Channel Tunnel linking Kent with Northern France is now taken for granted by many as being of obvious benefit to the UK and France as well as to the whole project of European neighbourliness and it may be that if a fixed link were ever to be built between Northern Ireland and Great Britain it would have similar positive benefits for those affected by it.

The Final Report of UCR is due to be submitted to the UK Government in the summer of 2021 and will, according to the UK Government press release which accompanied the publication of the Interim Report, “make a series of recommendations for future investment in transport between the nations of the UK”.

Brexit would seem to increase the importance of the UCR, in view of the challenges that face the UK post-Brexit.

The circles of Brexit are spreading deep and far! 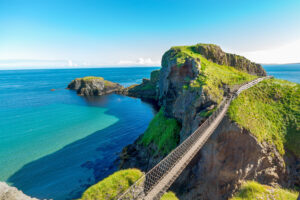 On 11th March 2021, the UK’s Office for Product Safety & Standards (OPSS), part of the UK Department for Business, Energy & Industrial Strategy, published a Call for Evidence in relation to its UK Product Safety Review. Responses are required by 3rd June 2021, and the OPSS has confirmed that the UK Government will aim to publish a follow up summary and evidence paper within 12 weeks of that date.

In its Introduction to the Call for Evidence, the OPSS explained that:-

“The UK already has one of the strongest product safety systems in the world. It is underpinned by product safety legislation that currently regulates how safe products are supplied and sold, by placing legal obligations on those in the supply chain. This body of law is extensive and complex, running to over 20 sets of regulations and many hundreds of pages.

“This framework is largely inherited from our time as a member of the European Union (EU). But now we have left the EU and the Transition Period has ended, we have full regulatory autonomy. We can set our own rules in the best interests of UK consumers and businesses, and divergence may occur as both entities make changes to their rules over time.”

To those who might be concerned that the UK Government may be thinking of embarking upon a Product Safety policy of change for change’s sake , the Call for Evidence endeavours to provide some re-assurance by stating that “the [UK] government recognises that the current regulatory framework, though substantial in size and extending to many pieces of regulation, is familiar and generally understood by businesses who use it most regularly”. However, the Call for Evidence does add that “we also need to consider businesses looking to develop innovative new products or ways of supplying them to consumers”.

The UK Government is not alone in wanting to review current Product Safety legislation because the European Commission itself launched a review in 2020 of the EU’s General Product Safety Directive (2001/95/EC)  (GPSD), with the understanding that a legislative proposal may be forthcoming from the European Commission in the Spring/ Summer 2021 to amend or replace that Directive. The reported objective of the European Commission’s review is to update the GPSD to regulate safety challenges linked to new technologies and online markets, to update the provisions of the GPSD on market surveillance, to simplify processes and to ensure better enforcement. These are all issues of the type that the OPSS might wish to address in its own review of evidence.

Diverging standards between the UK and EU in the area of general product safety could make life more complicated for businesses involved in product manufacture and supply chains with attendant price implications but, taking this into account, the interests of consumers might well be paramount.

Hopefully, close cooperation between the regulatory authorities in the UK and the EU over general product safety will continue and useful ideas coming from either party will be considered carefully and possibly adopted by the other – an important principle in this inter-connected world.