Brexit and Switzerland, the Queen’s speech and a UK Bill of Rights 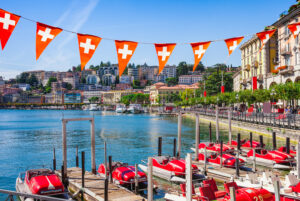 The existing continuity agreement apparently only dealt with goods and not with services and the intention is that the new enhanced agreement will deal with services as well. The Joint Statement refers, for example, to “continuing negotiations for a mutual recognition agreement in financial services” and to an intention “to deepen the UK-Swiss relationship in research, innovation and technology“ with a view to promoting “digitalisation and digital trade, mutual investment and closer links between researchers and businesses to stimulate start-up and spin out companies”.

The UK Government press release of 28th April 2022, confirmed that the UK Department for International Trade is launching an eight-week consultation calling on businesses and the public for their views ahead of the start of negotiations between the two countries, talks in terms of the new deal taking the bilateral trading relationship “to the next level in industries of the future such as digital trade, innovative services, and green growth – delivering higher-paying jobs across the country. It will support trade in vital industries of the UK economy, including finance, legal services, consultancy, the tech sector, and the creative industries, helping contribute to setting new rules and standards for digital trade in the 21st century”.

Brexit and the Queen’s Speech 2022

The Queen’s Speech was delivered to the two Houses of Parliament on 10th May 2022 and referred to 38 Government Bills to be presented to Parliament over the new Parliamentary session.

Other proposed Bills of interest from a post-Brexit standpoint (in terms of being part of the UK Government’s “taking back control” agenda) include the Genetic Technology (Precision Breeding) Bill, the Financial Services and Markets Bill, the Data Reform Bill, the Procurement Bill, the Digital Markets, Competition and Consumer Bill and a new Bill of Rights.

Whilst the Queen’s Speech has been criticised in some quarters for not addressing the Cost of Living crisis and other major political and economic issues, it certainly contains plenty of stuff to interest post-Brexit watchers.

Brexit and a UK Bill of Rights

The Queen’s Speech 2022, delivered on 10th May 2022, confirmed the UK Government’s intention to introduce a Bill of Rights to “ restore the balance of power between the legislature and the courts”.

The Bill (when enacted) would extend and apply across the UK.

Whilst the proposed UK Bill of Rights will inevitably lead to a focus on its relationship with the European Convention on Human Rights, a Convention entirely separate from the EU and to which the UK remains a party, there is concern that the proposed UK Bill of Rights may cut across or even jeopardise the UK’s relationship with the EU in some ways. For instance, there is concern that the EU’s “adequacy” decision in respect of the UK might be imperilled, particularly given the UK Government’s announcement in the Queen’s Speech to introduce a Data Reform Bill into the UK Parliament, which would give the UK the flexibility to develop  UK–specific data protection laws which are different from the EU Data Protection Regulation on which UK data protection law continued to be modelled at the time of and following Brexit.