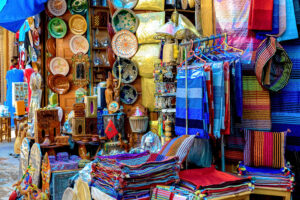 On 21st April 2022, The Times published a full-page advertisement from “Morocco Now”, the Moroccan Government Trade and Investment Agency, aimed at encouraging UK investors to explore opportunities in Morocco and at building up trade between the two countries. The advertisement referred to the recent official launch of “Morocco Now” in the UK and to its related B2B roadshow, both of which were intended to showcase “how the UK – Morocco business relationship can deepen, and what not to miss out on”.

The development of port facilities known as “Tanger Med”, the strength of Morocco’s passenger car manufacturing and aeronautics industries, the development of low carbon impact production and transportation in Morocco, and Morocco’s “young, dynamic, competitive, and qualified workforce” are all given as reasons in the advertisement for UK investors and traders to work more closely with Morocco. In addition to these industry sectors, Morocco’s food (including such stand-out items as tomatoes, which appear to have given EU tomatoes imported into the UK a run for their money) and drink sectors are established exporters to the UK.

On 26th October 2019, the UK and Moroccan Governments had signed a trade and political continuity agreement, essentially rolling over for the post-Brexit bilateral UK-Morocco trade and investment relationship the terms of the pre-existing EU–Morocco Association Agreement, which applied to the UK while the UK was still a member of the EU. Both sides seem keen to build upon that relationship in the future.

Both the UK and Moroccan Governments have referred to the strong ties that have existed between the two countries for over 800 years and (according to The Times advertisement) to quote Dr Andrew Murrison, the UK PM’s Trade Envoy to Morocco, speaking at the recent “Morocco Now” launch event in London: “I have a message for UK investors: You had better get on this particular bandwagon folks, because it is going places. Morocco has a truly great future in the years and decades ahead and I don’t want the UK to be missing out”.

On 12th April 2022, the UK Government published the Outcome (essentially a Summary of Responses from interested stakeholders) of its Consultation on Corporate Re-domiciliation.

In the “next steps” section of the Outcome document, the UK Government reported that it intends to introduce a corporate re-domiciliation regime, making it possible for companies to move their domicile to and relocate to the UK by enabling the re-domiciliation of companies. In its final paragraph of its “next steps” section, the Outcome document states, however, that more detailed analysis and engagement will be needed before it will be possible to enact the required legislation.  It concludes: “The [UK] Government will continue to develop these proposals [for corporate re-domiciliation] taking full account of the responses to this consultation, including further formal consultation as appropriate”.

It is perhaps significant that in the post-Brexit era the UK is open to new ideas for corporate reform.

According to the UK Government’s press release of the same date, under the new rules, UK public authorities (including the UK’s devolved administrations and local authorities) will, for the first time, decide whether to issue subsidies by following UK–wide principles. As the press release puts it: “These UK-wide principles will allow public authorities to deliver subsidies where they are needed without facing excessive red tape, creating a level playing field for subsidies across the entire country”.

The press release goes on:-

“The new rules will help foster a vibrant free market economy in the UK by banning unlimited government guarantees to businesses as well as subsidies granted to “ailing or insolvent” enterprises where there is no credible restructuring plan.

According to the press release, a limited set of subsidies will be exempted from the new subsidy control principles, such as those required for safeguarding national security and subsidies granted temporarily to address emergencies such as flooding. As is the case now, however, all subsidies will still be subject to WTO rules.

The press release reminds readers that on 25th March 2022 the UK Government launched a public consultation (closing on 6th May 2022) on the initial Subsidies of Interest/Particular Interest regulations.

The press release adds that, ahead of the new regime coming into force, the UK Government will be publishing guidance to support public authorities getting ready for the new rules.

In Northern Ireland, the press release refers to Article 10 of the Northern Ireland Protocol, which provides that EU State aid rules will continue to apply to the UK in respect of measures which affect trade in goods and wholesale electricity between Northern Ireland and the EU. The press release goes on that the UK Government considers the existing provisions in Article 10 to be “redundant in their existing form” and that “the current situation prevents subsidies from being granted on an equal basis across the UK, so there are issues to be addressed”.