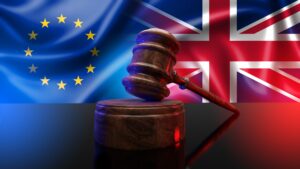 On 6th December 2021, The Times reported that the UK Government is planning further action to curtail the powers of the UK courts to overrule decisions by ministers through the process of judicial review. According to The Times, “the move comes after a series of clashes with judges that started over Brexit”.

One option apparently being considered by the UK Government, according to The Times, is the idea of an annual “Interpretation Bill” to be passed by Parliament into law each year, which would effectively strike out findings from judicial reviews with which the UK Government did not agree.

According to The Times, the UK Government’s approach arguably flows from the constitutional principle that Parliament is sovereign over the unelected judiciary – a principle which is said to be enshrined in section 38 of the UK’s European Union (Withdrawal Agreement) Act 2020, which provides in sub-section (1) that “it is recognised that the Parliament of the United Kingdom is sovereign”. Others would argue that the UK Government’s direction of travel on this issue is likely to subvert the rule of law to which the UK Government itself is subject.

In parallel with these judicial review issues, the UK Government has declared its intention to re-balance the UK‘s Human Rights Act 1998, which largely enacts into UK domestic law the European Convention on Human Rights 1950, so as to accord more directly with the UK’s democratic values.

A particular issue which has arisen is the balance between freedom of speech and privacy law. The UK Government has expressed concern, according to The Times, particularly in the light of the recent decision of the Court of Appeal in the Meghan Markle claim against the Daily Mail organisation on privacy issues, that the UK courts are tilting English law too much in the direction of continental European notions of privacy and too far against traditional  UK notions of freedom of speech. (The Times itself in a leader article for its edition of the 6th December 2021 entitled “Privacy and the Press” declares that “free speech is endangered by the trend to judge-made law”, though some might say that this is no more than what one would expect a newspaper to say).

There is a growing sense of conflict between the UK courts and the UK Government, which seems to have been exacerbated by the UK Government’s wish to distance itself from what it considers to be continental European legal principles.

This is unlikely to be the end of the story.

On 6th December 2021, the UK Government published its response to the outcome of its consultation on the Green Paper published by it in December 2020 entitled “Transforming public procurement”.

Public procurement is an area where the UK has taken back control from the EU following Brexit.

In its press release accompanying the consultation outcome response, the UK Government reiterated that its “goal is to speed up and simplify our procurement processes, place value for money at their heart, and unleash opportunities for small businesses, charities and social enterprises to innovate in public service delivery”.

In its response document (which is entitled “Transforming Public Procurement: Government response to consultation”), the UK Government announced its intention to:-

The UK Government has indicated that the new procurement regime is unlikely to be introduced into force in the UK before 2023 at the earliest and that in any event the Government plans to give a minimum of six months’ notice before the new regime goes live, once the legislative process has been completed.

On 30th December 2021, the UK Government updated its Guidance on “Trade with Singapore” and referred both to the Trade Agreement between the UK and Singapore which is in effect and to the Digital Economy Agreement which has been agreed in principle between the two countries.

The Trade Agreement is stated in the Guidance to include provisions on:

In the “ agreement in principle explainer” to the Digital Economy Agreement, to which there is a link in the Guidance, there are separate sections on:

The updated Guidance clearly regards trade with Singapore as significant for the UK.