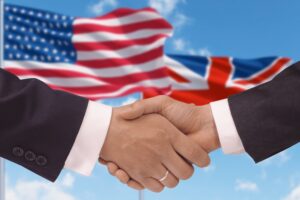 On 6th June 2022, Callum Jones, US Business Correspondent of The Times, had an article published in The Times in which he argued that “taking a state-by-state approach is no substitute for a UK-US trade deal”.

It does appear, however, that, for the US Federal Government, striking a US-UK  country to country deal is not a high priority at the moment.

Mr Jones’s conclusion is that for these memorandums of understanding to be meaningful they must focus on substance and not style and that “the state–by–state approach, provided it’s executed well, may genuinely enhance Britain’s post-Brexit agenda. Removing economic barriers could directly lift bilateral trade and investment with the US. Developing meaningful political relationships across the country could indirectly bolster the prospects of a Federal free-trade agreement, creating a loose coalition of support. But it is no panacea. A single pact is not a milestone.”

On 13th June 2022, the UK Government introduced the Northern Ireland Protocol Bill (“the Bill”) to the UK House of Commons.

The Bill is, to say the least, controversial in its objective to override parts of the Northern Ireland Protocol and has provoked threats of litigation and sanctions from the EU as well as an excoriating editorial from The Times on 14th June 2022 which concluded with the statement that: “Besides, overriding the protocol in domestic law does not alter Britain’s obligations under an international treaty. At best, the government’s actions set the stage for years of acrimonious legal disputes, at worst they risk a ruinous trade war. Far better even now that both sides return to the negotiating table and reach an agreed solution.”

The Bill, as presented to the UK House of Commons, runs to some 26 clauses and in clause 1 contains what it usefully describes in the title to the clause as an “Overview of main provisions”. Clause 1 provides as follows (allowing for typos):-

These are sweeping provisions,  to which perhaps the accompanying UK Government press release of 13th June 2022 gives context by stating:

The legislation enables the government to bring forward durable solutions in each of the 4 key areas. The solutions are:

The applicability and relevance of the “doctrine of necessity” in the circumstances of the Northern Ireland Protocol are likely to be hotly contested by many.

On 22nd June 2022, Jacob Rees-Mogg MP, the UK Government Minister for Brexit Opportunities and Government Efficiency, published the outcome of the UK Government review launched in September 2021 into the substance of so-called Retained EU law (REUL) to determine which departments, policy areas and sectors of the economy contain the most REUL.

The accompanying UK Government press release of 22nd June 2022 (described as a “research and analysis” document)  refers to this outcome of the review being in the form of an authoritative “Retained EU law dashboard”, which is publicly accessible. The press release goes on to describe the nature and functionality (and indeed the limitations)  of the dashboard in the following terms:-

“The catalogue of REUL can be accessed through an interactive dashboard. There are multiple options to explore and filter over 2,400 pieces of legislation which have been collected as part of this cross-government collaborative exercise. This exercise has also uncovered where retained EU law is concentrated in over 300 policy areas across 21 sectors of the UK economy. This catalogue is not intended to provide a comprehensive account of REUL that sits with the competence of the devolved administrations, but may contain individual pieces of REUL, which do sit in devolved areas.”

On next steps, the press release goes on to explain:-

“Creating this catalogue of REUL is the first step in accelerating regulatory reform and reclaiming the UK statute book. The government will continue developing this comprehensive record of where EU-derived legislation remains and will work to identify more legislation which can be amended, repealed or replaced. This dashboard will document the government’s progress against that aim. As such this is the first iteration of Cabinet Office’s interactive REUL dashboard. Going forward the dashboard will be updated on a quarterly basis, as REUL is repealed and replaced, or more REUL is identified”.

Whether this is a useful project or a waste of government resources, hopefully time will tell!

Meanwhile, on 23rd June 2022, The Times reported that Mr Rees-Mogg had said, in the context of the Retained  EU law dashboard and the proposed Retained EU law Bill (also known as the Brexit Freedoms Bill), that Britons would be able to enjoy sparkling wine in plastic bottles and bed and breakfast establishments in the UK would be able to sell fishing trips without registering as tour operators, as part of an overhaul of  EU regulations still in UK law. The Times also reported that he had said that by culling hundreds of “minor obstacles to doing business” the UK Government hoped to boost the UK economy – however, after a Cabinet dispute, he had failed to make a commitment to a five–year sunset clause on retained EU laws. According to The Times report, Mr Rees-Mogg had also insisted that the move to reduce the burden on business after Brexit would not impinge on maternity and employment rights or reduce environmental protections.

We shall see what happens!